The always insightful Seth Godin on the state of the music “industry”. Seth NAILS it on the head when he says “People who want to invent a whole new set of rules, a new paradigm, can’t believe their good fortune and how lucky they are that the people in the industry aren’t noticing an opportunity…”

I couldn’t agree more, and now that I’ve got this site up and running, I’ll be writing more along these lines.
Let’s do this! 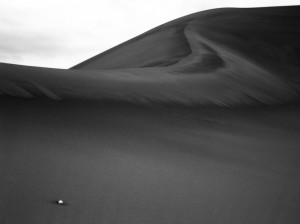 Golf is my teacher, my meditation, my compass, my punching bag, my fortuneteller, my escape, and my mirror. It has been called everything from “the perfect asana” to “a good walk spoiled”. I prefer the former.

For many, golf is an “activity” for lazy, fat, rich, white men. Thankfully, Tiger Woods came along 10 years ago and uprooted that with his pure mental and physical domination of the game. I like Tiger. He’s a performer and winner, yet he grasps the nature that golf is a pursuit to be continuously explored, studied, and mastered, yet will never be conquered. He’s traditionally dodged any questions pertaining to the “deeper pursuits” of golf, despite the fact that his mother is Buddhist, however I sense a deeper connection to the game beyond his physical and mental fascination.

Golf, and more precisely the golf swing, tells me a lot about what is going on in my life. I’m open to the possibility that it’s all projection; but that still leaves the beauty that the swing is an echo of what’s happening in the moment. By the way, Michael Murphy wrote the seminal work

Golf in the Kingdom

on the subject of golf = life = spiritual expression, so if it peaks your interest – start here.

For simplicity’s sake, let’s just accept that the golf swing includes 5 parts: the grip, the setup, the backswing, the downswing (pre and post contact), and the follow through. I find that as my life goes through stages of development, both as a whole, and in parts of everything from relationships to projects, aspects of struggle and success manifest in my golf swing accordingly. For instance, the last few years I was “coincidentally” working on reconstructing my setup and backswing (preparation) as I was developing and creating new projects in my work life.

After several years of preparation on both fronts, I realized I was in a perfect position “at the top” (the moment the backswing ends and downswing begins), however the contact and follow through fell apart. What was going on in my life? I was spending an immense amount of time sculpting and perfecting recordings and albums, however when it came time to launch, the records fell flat.

I assumed that the publicity and release of the record (much like the “release” of the club) was someone else’s responsibility. I spent months creating a fantastic album, and then waited for someone to send me a royalty check. And while the latter stages weren’t my responsibility, they were responsible for me not garnering success from all of the work I had done. In short, who cared how great the production of the album was if I DIDN’T HIT THE BALL AND FOLLOW THROUGH.

Since that period in my life, I have worked more on personally escorting projects as far as I can. Concurrently, my golf swing’s impact position and after became the point of study. I began to experience the feeling of compacting the ball, releasing the club, and finishing balanced and complete. Because in the end, that’s all we can do. Make a full swing with complete intention and connection and trust the results…

But today I worked on my grip. I’ve felt a reboot coming in my life for a while and it turns out my golf grip is a little off. My hands are unconsciously separating during the backswing, and consequently are hopelessly disconnected by impact. On the range, I realized that the more my grip is off in the beginning, the less of a chance anything after that has of being effective. As I drove home I wondered, what is the essential reboot in my life that wants to happen?

Grey hair is only sexy on a man, if he’s wealthy.

Otherwise, it looks a bit lonely.